In this series of posts, I want to test in what capacity a AAA-game in a historical setting can actually teach me – as an aracheologist – something I don’t know about history. I have studied Near Eastern Archaeology, Prehistory and Assyriology, but never Egyptology, what would be the perfect branch of study for this game. Nevertheless I still can learn and by playing Assissins Creed Orgins and researching the scientific facts behind it, I want to find out if the game is well researched and document what I learned from it. Spoilers ahead!

The game starts with an introduction and a date right away. We start in the year 49 BCE (and after a short cutscene 1 year later in 48 BCE) and we see the Pharaoh Ptolemy, who must be Ptolemy XIII, the brother of Cleopatra. The Ptolemaic Period (310-30 BCE) was right after the invasion of Alexander the Great in 332 BCE and a short Macedonian Dynasty and directly before the Roman Period . The rulers of Egypt in that time were Greek descendents and not Egyptian.

In that time however, the Ptolemaic Period was coming to an end due to dynastic infighting, Egyptian rebellion and the increasing influence of Rome . Ptolemy exiled his sister Cleopatra to Syria, which should return in 48 BCE (so exactly when we play the game!) with the help of noone else than Julius Caesar. So this game seems to be placed right in one of the hotspots of Egyptian History!

The first location we enter is called the Oasis of Siwa. The site was the place where Alexander the Great was proclaimed a god by the renowned oracle of Amun. From this time onwards, he is often depicted with ram’s horns, a symbol of Amun . He had the wish to be buried in Siwa, although he later died in Babylon in 323 BCE and his body was ultimately brought to Alexandria, where he was buried in a dynastic crypt called the Sema, that actually has not been found yet . 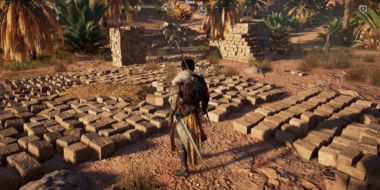 Wandering around Siwa however I took an interest in watching the daily lifes of the inhabitants. One aspect in particular was interesting me: how is the production of goods displayed. Throughout the location, you can find different areas of production: Mud-brick production, dried fruit processing, bread baking, and most probably more, that I just did not came by. Concerning the mud-brick production, I felt that the depiction of it was quiet well done, as we can clearly see formed mud-bricks drying in the sun and besides them hay for tempering.

To sum my first experience up, I can tell so far that the historical representation is not that bad. Of course we have to consider that this is an entertaining game and I will not even start with the main characters weapons, clothing or story. Also, we have to see how the game develops and depicts the events to come. I already wrote about the history that should take place. Let’s see if Ubisoft will stick to it.

This will be a post series and as soon as the second part of it is ready, I’ll link to it here.