Ever since we started experimenting with an RTI Dome, I developed the idea of improving the control unit of the dome. With our second dome on the way, we are experimenting with some changes to the original software to improve the unit.

At the Insitute of Archaeology, we have a RTI Dome with a diameter of 1m. This dome works perfectly for objects of a size between 20 – 50cm. With the correct lens, you can even come closer to the object and document even smaller objects, although this comes at a price: resolution. We did build our first RTI Dome according to a manual deployed at hackaday.io by Leszek Pawlowicz. He based his dome on a 8×8 LED matrix that is controlled by an Arduino board connected by some ethernet cables. This setup works fine and we were able to do very good RTI images and use the dome even for teaching. 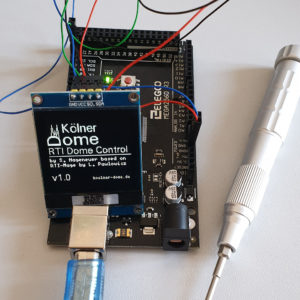 For smaller objects though, the big dome seems unpractical. Due to storage reasons, we always have to pack the dome into a transport box when not in use and reassemle it as soon as we need it. We therefore decided to also build a smaller dome with a diameter of 50cm. With the experience we had so far, we also were thinking about some improvements. Mainly, I want to improve the control unit of the dome, as it is actually pretty uncomfortable. Don’t get me wrong, it works just fine, but I think life can be much easier. We therefore decided to slim the software down a bit, so we get rid of everything we don’t need and to increase the size of the OLED, that indicates the status of the RTI process and the settings. As you can see in the image, I was able to already code the startup screen with our new and own logo. We call the RTI dome the “Kölner Dome”, get it?

In the long run however, I plan to swap the Arduino based control unit with the bigger OLED with a Raspberry Pi-based unit with a 7″ touch display. Together with our own 3D printer, we should be able to produce a pretty professional looking control unit, that can be used with both our Domes and is more easy to use, as we would have a bigger screen and can do all the settings with the touch display, instead of physical switches and buttons.