We did a conference!

It was really engaging and here is a wrap up of what I learned.

As you may have noticed, our department for Digital and Computational Archaeology (“Archäoinformatik”) at the University of Cologne hosted a symposium on “Communicating the Past in the Digital Age – Digital methods for teaching and learning in Archaeology” on the 12th and 13th October. We were very happy to have contributions from all over the world, from Australia, Canada, Germany, the Netherlands, Spain and the UK. Our conference was organised in four sessions, focusing on Archaeogaming, teaching in museums, teaching in the class room and digital learning environments. I don’t want to give a talk-by-talk recap, because Sebastian, as the main organiser, already wrote two very short ones: for Day 1 and Day 2. I rather want to focus on topics that stuck with me.

I’ve been to tweeted-on conferences before, but this time the #ComPDA – hashtag involved more than just comments like “person a is talking about x”. People gave comments, asked questions, added literature and some discussions were continued even after the event. It was a small group, but nonetheless a great way to communicate! (Though it is quite challenging to tweet and continue listening… 😉 )

Second: The Theory of teaching

I’ve been struck by how well thought out some teaching concepts were that we’ve been shown. Being a “normal research assistant” I’ve been given the opportunity to go to a few introductory classes on teaching and didactics, but they’ve been quite low-level. At #ComPDA we discussed not just “basics” such as “first create learning outcomes” (comment by Sara Perry) and transferring pedagogical goals to design goals (Juan Hiriart’s talk), but also how emotional connection is important for people to remember things. So for example there are the methods of historical empathy (Sierra McKinney and Sara Perry’s talk), immersion (Ana Martí Testón’s talk), play (Angus Mol and the VALUE foundation members) and for creating conflicts between identities to make people reflect (Juan again). Sadly I don’t remember all concepts Anna Riethus detailed in her talk, but she was keen on constructivism – enabling people to construct the knowledge themselves. 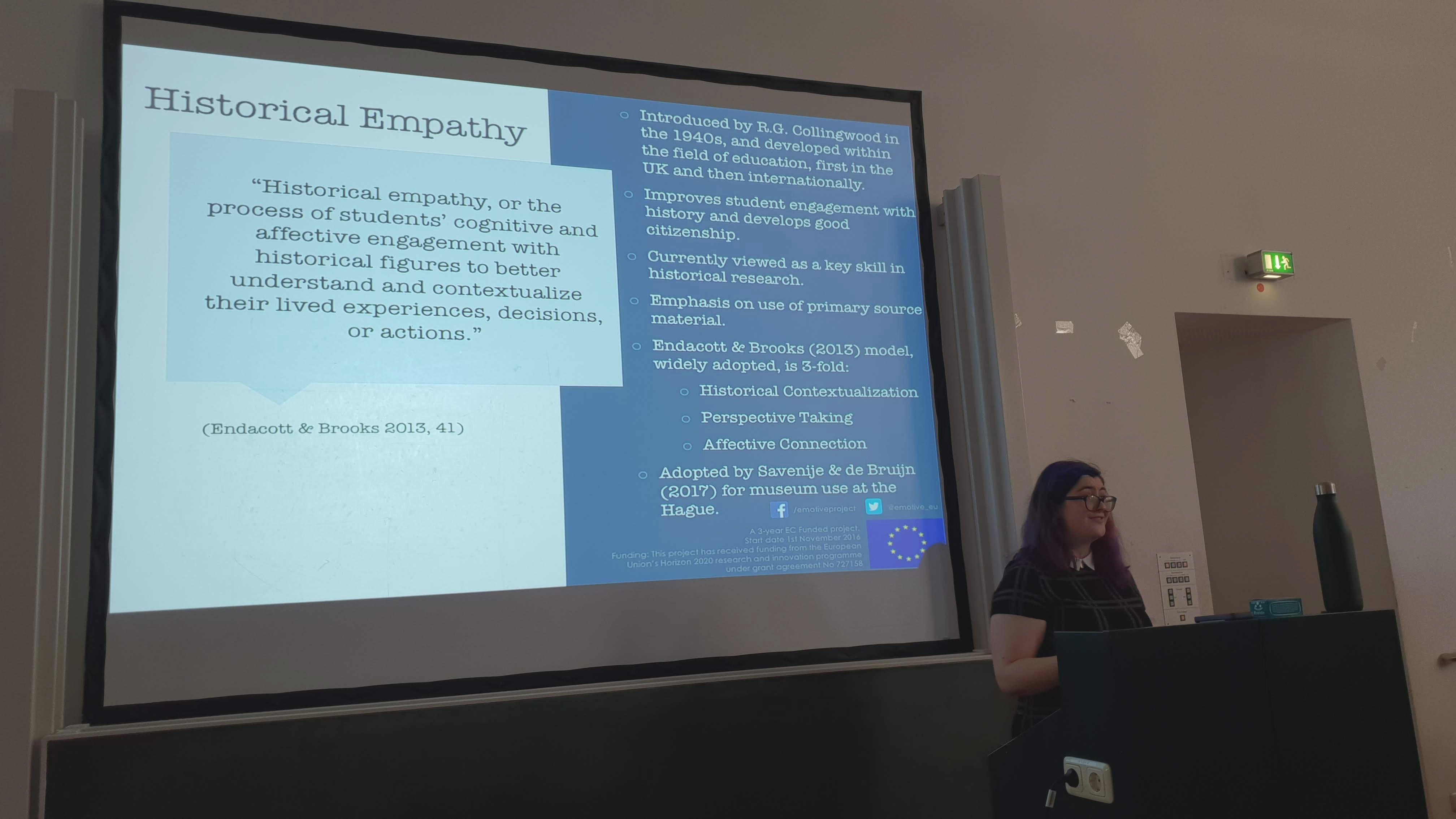 It seemed that this topic has been much more discussed in the anglophone world than in Germany. We had really interesting presentations about great projects from Germany as well: The Neanderthal museum’s approach to inclusion was singular in it’s consideration of the visually impaired (Anna’s talk), several geo-caching games have been developed by students in courses given by Michael Remmy, the museum in Xanten employs 3D models (Stephan Quick’s talk) and David Hölscher has just started a PhD in which he’s developing public outreach bike tours for different landscapes. To me, the difference quite often (not always) seemed to lie in the approach, which was more “hands-on” orientated in the German projects and more theoretically motivated in the anglophone ones. This is quite typical of our different research traditions. Anyone heard of the “Kossina syndrome”? … maybe that’s a different blog post. In short: For decades German archaeology has focused on regional typo-chronologies and material culture. A broader theoretical discussion re-entered the field only in the last twenty years (but our knowledge of material culture is really well defined by now! 😉 ).

Also:  There are more and more apps with great games for public outreach in museums in development. Sadly, not many are evaluated for impact and learning results. This needs to change!

Not just in the engaging talk by Meghan Dennis about ethics in archaeogaming (“artefact acquisition in games is usually nothing but looting”) and Katherine Cook’s talk on decolonisation and the ethics of public outreach and community engagement, but in a lot of other talks the topic of teaching ethics and ethical behaviour came up:

I’m sure I forgot half of the topics that were mentioned or discussed with ethical implications. Maybe one more thing: In  Sebastian’s very open and honest talk about his experience in 3D reconstruction for research institutions and museums one conclusion was that people want the “good looking pictures” and not the differentiated 3D reconstruction, that details the different degrees of certainty, leaves areas blank or similar. I wondered afterwards whether this maybe also a result of the fact, that the first contact people have with 3D environments are games. Games accustom us to complete and realistic looking 3D worlds. The archaeological world is very fragmented, though, and we are struggling with bridging the expectation gap between what people are used to see and what we want to show / think is ethically correct to show, because otherwise wrong pictures might be stuck in heads. It is a difficult question.

I already wrote about disappearing digital data in the long term storage of all things digital and didn’t know there was such a catchy phrase for it! At #ComPDA, though, Eric Champion discussed 3D models a bit more in detail: There are many scientific articles on 3D models that were produced, but if you want to find them online most of the times you will fail. They either do not get published online or they were taken down again. This means, most of the publication on 3D models is in 2D and nothing more. Where is the sense in that?! 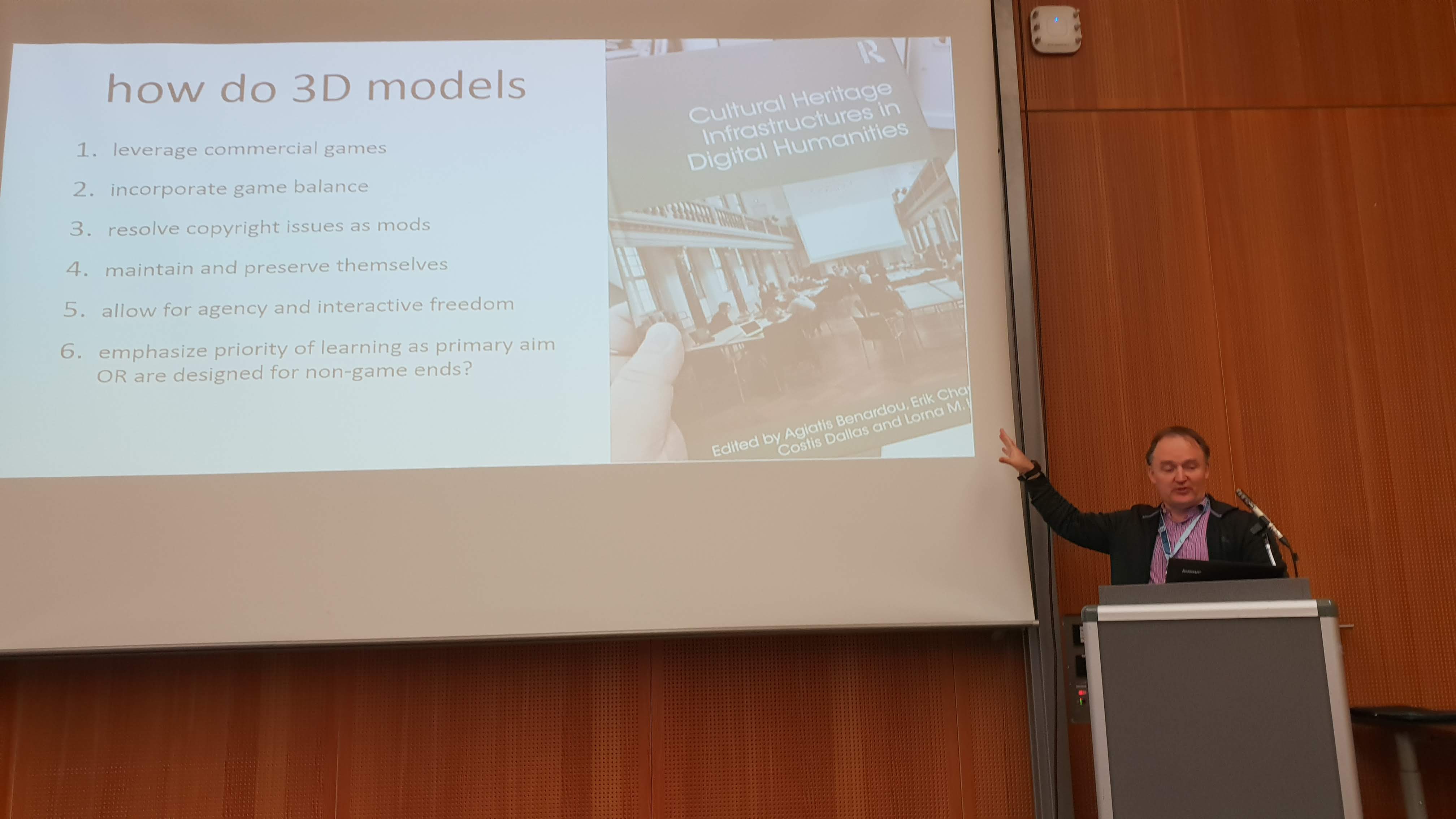 I don’t think we are able to find a solution to this problem quickly, but open access repositories sounds like a good idea to me…

Ana presented a great paper on her and Adolfo Muñoz work on an Augmented Reality application at the archaeological museum La Almoina in Valencia. Guys and gals, AR is coming and it is going to be extraordinary. The pictures looked amazing and I really really would have liked to try their application on the Microsoft Hololens. I fear we will have to wait a few more years before this will become affordable for many museums, but then…

Xavier Rubio-Campillo presented his newly released game to us: Ancestors: Stories of Atapuerca, in which the player needs to guide homo antecessor and homo neanderthalensis tribes through difficult times. He could show that just by game design the player learns things about these homo species (whether they used ornamentation, who did what kind of work, which game they hunted, what tools they used, what did the landscape they lived in look liked, …) and that this doesn’t need to impact fun factors of the game.

Juan Hiriart showed us the game he’s been developing, in which players need to survive for one hundred days as a farmer in Britain in Anglo-Saxon times. Sadly I didn’t manage to play it during our technical demo, but it looked not just like a great visualisation of material culture, but also incorporated taskscapes, everyday challenges of this time and displayed the social structures of early medieval communities. He’s been thoroughly testing what children learn by playing this game and I am very much looking forward to an in-depth discussion of his results!

Ever heard of Minecraft? I’m sure you have. Do you also know the RoMEINcraft project by the VALUE foundation? It’s a fabulous way to engage children to learn something about the Roman past in the Netherlands: They are invited to join rebuilding Roman fortifications in the game. And even if there are polar bears popping up in it, it means kids have been playing in this world and have gained insight into it – even if they chose to not build historically accurate reconstructions. 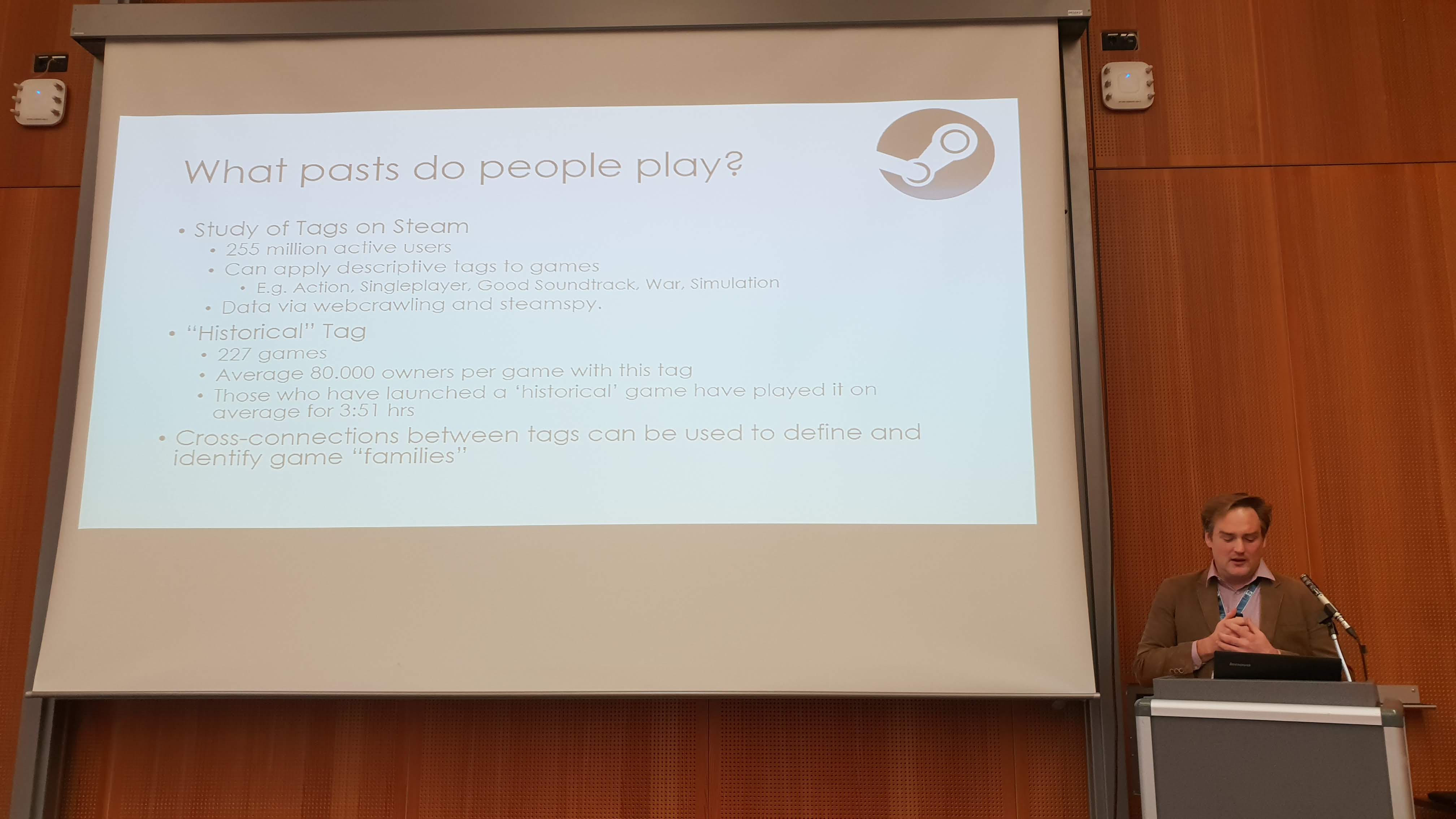 It’s not really a game and this post is too long already, so I’ll just shortly mention the talk by Felicitas Fiedler, Erika Holter, Una Schäfer and Sebastian Schweisinger about the reconstruction of the sound of a speaker on the Pnyx in ancient Athens. They also offered the technical demo to us and it was really engaging to hear and see – not just read about! – what a person might have been able to hear and see in ancient times and fiddle with the many possibilities of different settings (e. g. is the crowd shouting angrily or just murmuring? is the speaker talking forcefully or relaxed? what kind of bema is he standing on? …). Of course this is just a simulation, but a very enlightening one!

So all in all, this was a great conference for me and I learned so much I forgot half of it again. Also, I’m proud of two things: I chaired my first session on this conference. And I managed to put all of my six points in this post as alliterations. Guess which was harder… 😉