In this series of posts, I want to test in what capacity a AAA-game in a historical setting can actually teach me – as an archaeologist – something I don’t know about history. I have studied Near Eastern Archaeology, Prehistory and Assyriology, but never Egyptology, what would be the perfect branch of study for this game. Nevertheless I still can learn and by playing Assissins Creed Orgins and researching the scientific facts behind it, I want to find out if the game is well researched and document what I learned from it. Spoilers ahead!

So after getting into the game in the last part, I focus my attention this time to the “Discovery Mode” of Assassins Creed Origins. The Discovery Mode is a guided tour system for the game, where you do not follow a story, but can explore the whole world of the game without limits or being attacked. Within it, there are 75 guided tours, which you can choose from. Tours start at certain points in the world (which are indicated by the map and where you can fast travel) and consist of several points, that you need to walk to sequentially. On each point, a narrator tells you something about some aspects of Egyptian history, like the life of Cleopatra, the importance of mummys, religious life of the Egyptians or the way ancient Egyptians dressed. 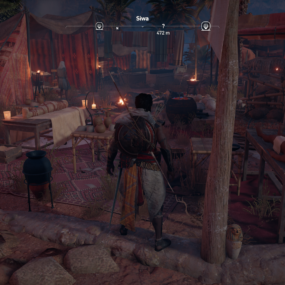 Overall these tours are pretty well made, you’ll learn actually something by listening to the voice and watching the respective images that come with every station. These images are a mixture of photos, concept drawings made by Ubisoft (the company that made Assassins Creed) and reconstruction drawings. This of course interests me especially: The reconstruction drawings are exclusively made by Jean-Claude Golvin, a well know figure in the archaeological world of scientific reconstructions.

One other thing that I really enjoy is the “Behind the Scenes” feature, where the narrators explain why the team of Ubisoft decided certain ways for portraying Egyptian life. For example, when visiting the temples of Egypt, the narrator explains that usually not all people had access to the saced space. For the sake of the game however, the team decided to leave that part of the world open to the player to explore. In my opinion, this is the perfect balance between playability and truthfulness to archaeological sources. Which brings me to my point.

As archaeologists, we quickly judge computer games (and other genres too) to convey a false image of the past. As an archaeologist who spezialises in 3D reconstruction of ancient architecure, I am a lobbyist in defending correct reconstructions in contrast to unscientific even fantastic drawings of the ancient past . Nevertheless, one needs to know where the limits are. We cannot expect a computer game to display the past as it were (not that we would know!) and still have an entertaining effect. We kind of need to understand, that there is a primary function of video games, namely to make fun, to entertain and to engage with people. A secondary function however could be to teach us something. In my opinion, Assassins Creed does a great job on that, finding the right balance between fun and facts.